Norman Foster’s vision for a network of bike paths suspended over London’s railway lines, could see commuters gliding over the city as they travel to and from work. Unveiled earlier in January, SkyCycle would allow cyclists to move through the city completely liberated from the roads. The plans have already won the backing of Network Rail and Transport for London and would see the installation of over 220km of elevated, car-free routes suspended on pylons over the suburban rail track lines, with over 200 entrance points, ultimately accommodating 12,000 cyclists per hour. Lord Foster, for whom cycling is a great passion, describes the plan as “a lateral approach to finding space in a congested city…By using the corridors above the suburban railways, we could create a world-class network of safe, car-free cycle routes that are ideally located for commuters.” The idea gained the approval of the London Mayor, Boris Johnson, by complete accident after Foster’s team bumped into Boris in the lift on their way to a meeting at City Hall. The addition of SkyCycle to London’s already eclectic skyline would present yet another innovative way in which the historic city has continually evolved and adapted to its growing population and to changing fashion. 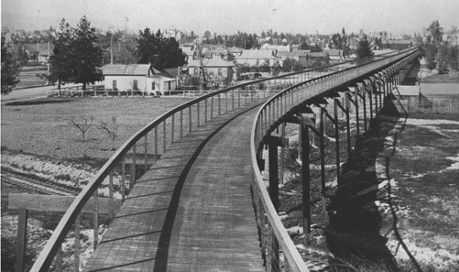 Originally conceived in the 1890’s as a money-making enterprise, the California Cycleway (to connect Pasadena to Los Angeles via 14km of raised timber decking, with a toll of 10 cents per Cycleway user) was never completed due to the rise of the Model T Ford and the automobile industry. Only 2km of the track was built before construction ceased. Will Foster’s SkyCycle prove better luck?  Image source: Cycle Infrastructure/nai010